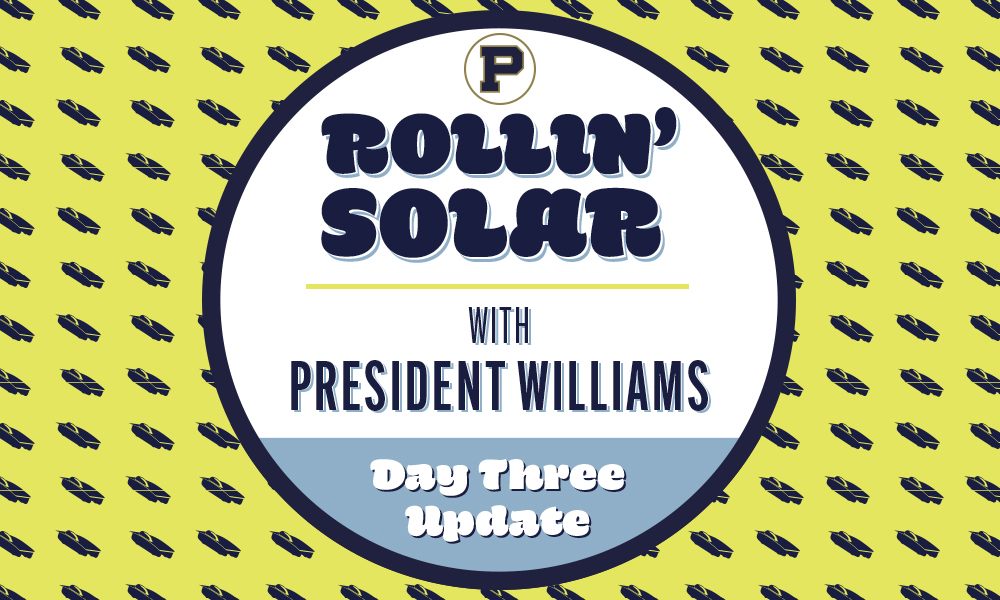 That’s not an idiom! It’s a reality. Crossing eastern Colorado is hot (or as Missy says with understatement, “toasty”). The slogan for the MIT car is, “Born in Fire” (a reference to having to cast part of the vehicle). The Minnesota car (the Humvee stepped on by an elephant—see earlier blog) had a battery fire climbing the Raton Pass.

Only two of the single occupant cars made the Raton Pass under their own power—all 8,000 feet. Oops, I’m exaggerating—it’s only 7,835 feet. Missy and I were at the New Mexico State Police weight station at the top of the pass. Missy was chatting with the state troopers, and I was watching the efficiency of the MIT team.

Two small scout cars arrived and set up safety cones, claiming slots normally occupied by massive tractor trailer rigs. Not long after, the MIT truck and trailer arrived. The team opened the trailer to receive the car. Within moments, two small cars—lead and chase—escorted “Born in Fire” to the trailer. With military efficiency, the students prepped the car, stored it in the trailer, and buttoned up the rig. The vehicles started to move as the last students dove into their assigned seats. At one point, someone asked for a tool and three wrenches appeared.

Over the next hour, more scout cars and truck trailers arrived, but no solar cars. The Principia truck and trailer arrived with the news. Raton Pass had become the graveyard of solar cars. Missy spotted panic among the Minnesota team as they dashed for their truck and trailer rig. Somewhere below us, a battery was burning. No one was harmed.

RA XI was creeping up the mountain—on the shoulder of Interstate 25 at a pace of a slow walk. The battery was nearly drained; they were using energy directly from the sun. The deadline was approaching. At 6 p.m., every car is required to stop where it is. The spot is marked, and the race resumes at 9 a.m. the following morning—crawling up that darn hill.

With minutes to spare and slowly creeping around the mountain bend were two cars—RA XI and Appalachia State. App State is the other multi-passenger car. One of their drivers declared proudly, “we were born in the mountains,” though their slogan is “Runnin’ on Shine.”  Principia crossed “the finish line” for the day at 5:59 p.m., and App State crossed at 6 p.m. Not a second to spare.

Missy paved the way with the state troopers who let RA XI “set up the array” at the weight station. The top of the car, covered with solar cells, was tilted to face the setting sun—two full hours to try and replenish the depleted battery. It’s certainly better than a fried battery.

After sunset, the team rolled down the slope into Raton. Friday morning will start at 7 a.m. back at the weight station. RA XI will be rotated 180 degrees to catch the rising sun. We’ll have two hours before racing resumes at 9 a.m. Somewhere, deeper into New Mexico, rides MIT.

Thursday began before sunrise as the team “trailered” RA XI back across the Kansas-Colorado line to where our Wednesday racing ended in the oncoming storm. The midday stop was outside of La Junta, Colorado, at a National Park Service site called Bent’s Old Fort. The structure was a traders’ fort rather than a military fort in the years before and around the Civil War. It sits at the junction of several trade routes, including the Santa Fe Trail and the Arkansas River (the river is a long way from Arkansas). Mr. Bent was a merchant who built and managed the fort. Toward the end of his career, rather than sell the fort at a discount to the military, he burned it down. Can you detect a theme of the day?

I’m not sure how someone burns a two-story mud fort, but Bent was alleged to have committed the deed. Later, he built a new fort . . . hence the illuminating need for Bent’s Old Fort and Bent’s New Fort. The former is like a living museum, complete with livestock. I was escorted around the compound by an insistent hen. On the railing above us was a peacock. I’m still wrapping my head around a peacock in an antebellum mud fort on the banks of the Arkansas River in Colorado hosting a solar car race.

The National Park Service is one of the race sponsors. The American Solar Challenge follows the route of the National Park Service’s Santa Fe Trail network. A team of rangers has been following the race and setting up mobile information booths at each stop. Several hundred spectators came out to study the cars, interrogate the students, listen to mini lessons from rangers, tour Bent’s Old Fort, and interact with Henrietta the chicken.

As per practice, the Principia truck and trailer and the Prez Prius were waiting at the Park Service site for RA XI and escorts. Chatter on the group text had turned concerning. It wasn’t Henrietta but a front brake on the lead van. Someone was assigned to take the van and find a repair shop. The now-absent lead van was replaced by the scout van which would be replaced by . . . the Prez Prius?  It made sense to everyone but me. The car was already registered as a race-team vehicle. It had all the official insignia, plus Principia markings. The driver was a registered member of the team.

The scout van was emptied of its cargo. Namely all of the luggage, sleeping bags, food stuff, folding chairs, bottled water, extra peanut butter, 3D printer, ice chests, dirty laundry—in short, everything found in a men’s dorm room. Items were quickly shuffled into the solar car trailer and then into the worrisome lead van—equipment, tools, spare parts, PB&J sandwiches—before being shifted to the scout van.

This is where I decided to take my walk with Henrietta. She scurried between my legs, followed me through the replica workshops of Bent’s Old Fort, led me to a couple of photo ops, and tried to peck at Missy’s legs. Henrietta’s advice was to take a moment and drive into La Junta. We needed to get gas for the car, and she suggested taking Missy to lunch at Carl’s Jr. The little local lunch spot provided an unusual vista—one of the largest railroad switching yards in the Midwest. I contemplated Henrietta’s advice over a grilled ch***ken sandwich.

By the time we returned (let me make clear that Henrietta stayed at the fort and is still pecking visitors’ legs), the faulty brake had been repaired and the lead van was returning. It was nearly time to resume racing. We took everything out of the scout van, put it back in the lead van, and emptied out the solar car trailer, stuffing the belongings into the scout van. This meant there would be room in the Prez Prius for the First Lady.

That’s a good thing, because she spots the unusual aspects of life—the three zebras near Las Animas, a fish hatchery and rearing station (“rearing station”?), a couple of sod structures, asking about the Sand Creek massacre (we passed the site; you need to look it up). She’ll strike up a conversation with anyone, compliment a woman in Council Grove on her very short haircut; tell state troopers in Hobbs, New Mexico, about the tumbleweed down main street (they laughed at the image); discover others with Native American heritage; thank park rangers for their service as educators; ask MIT students where they live in Cambridge; listen to the life stories of bystanders at each stop; and compliment the manners of the Principia students to everyone she meets.

Two o’clock countdown. The mighty monster from Minnesota dashed (it can move quickly) onto the two-lane blacktop, its convoy turning westward. Following was the other multiple- person car “Runnin’ on Shine.”  As a college president, I’m trying to figure out the optics of the slogan, and I admit that AppS’ slogan is catchier “Powered by the sun, fueled by the mind.” Only a college president would love the latter.

I’m amazed at how App State has gotten the entire world to put its university name on smart phones and tablets. Who was the marketing genius? Now, everybody knows “AppS.” They pulled on to the blacktop and promptly stopped. Bad batch of shine? Illini, MIT, and RA XI needed to navigate around the traffic situation. Illini (which folks insist on pronouncing “ill-ee-knee”; at least they use the silent “k”) was the first traditional car to arrive at the stop and so was the leader of the single-occupant cars.

True to the slogan, the first shall be last and the last shall be first, App State beat Minnesota to the New Mexico state line. And MIT and Principia beat University of Illinois. We travelled from state to state to state and moved luggage from van to van to van (and back again). I have little doubt that the kids from Cambridge are closing in on Las Vegas, New Mexico. Like I said, everyone was on fire today!