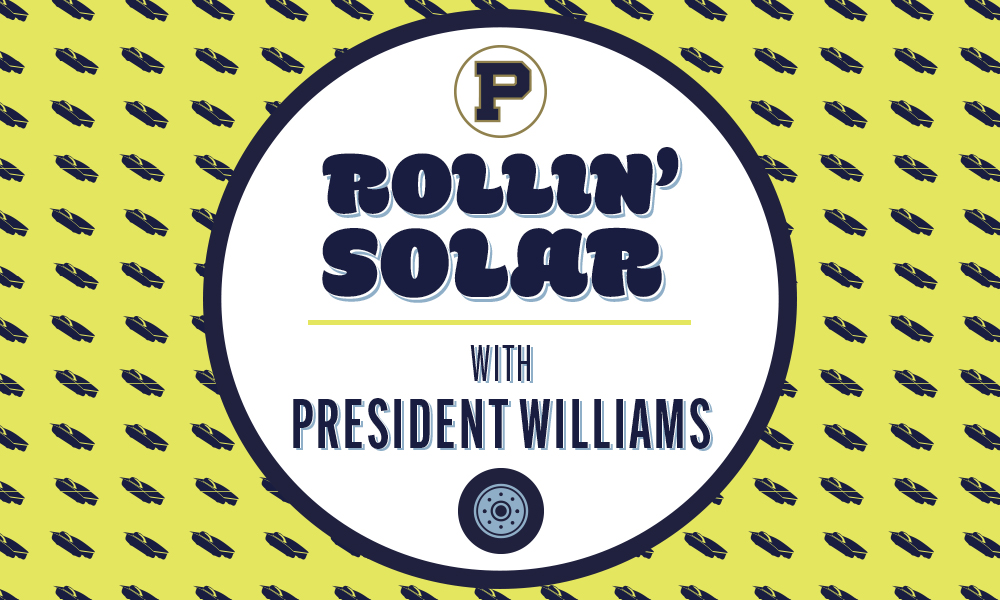 The roar of eight cylinders. The smell of diesel. Thick dark smoke out of the mufflers. The roar of the crowd. Whoa . . . put it in reverse.

I didn’t know that solar cars had exhaust pipes! Professor Brian Kamusinga, one of our RA XI faculty advisors, was pointing out the features in the interior of the solar car entry of University of California, Berkeley.

“Is that a rain gutter?” I asked. You know the white metal downspouts that drain water from the roof. One was laying inside the “CalSol” car. Professor Kamusinga explained that it carried off the heat from the very large battery that stored the energy from the solar cells. Our car, RA XI, has something more sophisticated. It looks like a tube from a vacuum cleaner.

It’s the first full day of racing, starting in Independence—the hometown of President Harry Truman. The solar car teams received their instructions, displaying the cars, posing for photographs, and eye-balling the competition. Solar car racing, I witnessed, is more cooperation that competition. Teams are quick to ask for assistance and just as quick to help each other—sharing tools and scrounging parts.

After walking about the display area, several blocks from the home where Harry and Bess Truman retired after his presidency, I organized the cars into three “hulls”—mono-hull; catamarans; and trimarans. Single hulls can be efficient. They part the air ahead and bring the air back together after they pass. But, the single hulls have a tendency to wobble and tip over.  That’s embarrassing—to be sitting in your car and have it tip over (I exaggerate—blown over by strong winds).

RA XI is a double hull—a catamaran. It’s pretty efficient. At first, I worried that the air passing under the car, between the hulls, would lift the car off the ground. Ah, airplane wings are designed to cause lift. So, turn the car upside down. Not literally. Just design the airflow to keep the car on the road. The driver, though, is situated in the left hull. This means that a strong wind coming against the driver’s cab has an undue effect, pushing the car to the side. It might be like landing a plane in a crosswind.

This leads me to the trimaran, in which the driver’s cab is located in a middle hull. The hull, though, does not touch the ground. That would require six wheels, rather than the four expected for this year’s design. The trimaran doesn’t wobble or get unduly blown right or left. However, it means the car is larger and heavier, requiring additional power, and perhaps a bigger and heavier battery.

More disconcerting is the thought that the driver is sitting just inches above the roadway. “Say, is that a muffler laying in the highway? No worries. Just a downspout from California.”

Speaking of four wheels, the 2021 American Solar Challenge has introduced a new category for multi-passenger solar cars. A third of the cars will be traveling with a driver and a passenger. One of the cars is designed for a driver and three passengers. That car will need two downspouts.

The race begins Tuesday. I’ll save the story about hairdryers for then, along with tips on how to clean your solar cells.