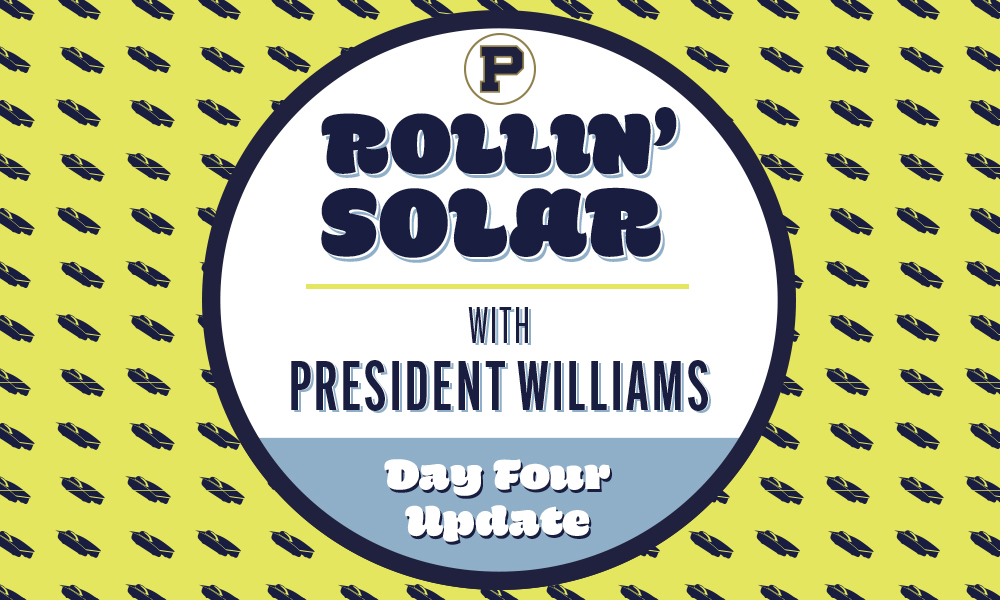 We made it to Las Vegas! We know what they say about Las Vegas, New Mexico—“Really?  Where is it?”

It’s south of the border—the Colorado-New Mexico border, with real Mexican meals, not Taco Bell. Tired of hamburgers and Henrietta’s grilled ch**ken sandwiches, we searched out the locally owned Mexican restaurants—like Casa Lemus in Raton and Pino’s in Las Vegas.

Las Vegas is east of Santa Fe, somewhere north of I-40 and too far from Texas to toss an armadillo. We didn’t see any armadillos, but did we passed a deer waiting to cross the main street in Cimarron.

For our journey south from Raton to Las Vegas, we tried to avoid Interstate 25 when possible. After a two-mile stretch of the freeway outside of Raton (speed limit 70 mph—not good for solar cars traveling 35 or 40 mph), the race route took us across the rolling plains and into the Sangre de Cristo Mountains. The task of the Prez Prius today was to hopscotch ahead of the RA XI team and capture drone video. We found a well-suited rise on a two-lane highway and launched the drone. Yes, it does sound like a cloud of angry bees.

We debated what to call a group of angry bees—colony? Not rebellious enough. Hive? Too sweet sounding. Swarm? Already taken by the Iranian Revolutionary Guard navy. Our avoidance of a Wikipedia search was interrupted by the distant of “puph” or, in English, “poof,” only with a baritone sound. I thought it sounded like artillery, only it was happening much too fast and too many times and was very random. Who orders “fire for effect” in the vastness of New Mexico? The U.S. 1880 Cavalry was one suggestion.

Standing quietly on a rise at edge of the vastness of the Great Plains leads to all sorts of contemplation. The unexpected approach of the lead van, RA XI, and the chase van brought us back to our current task. The drone was in the air, and we filmed some fun video. Afterwards, hunched in the limited shadow of our Toyota Prius (it is a low car, so there wasn’t much shade), we critiqued the video.

We quickly packed the equipment and raced to catch up. The roads, two-lanes with limited shoulders, are straight with clear sightlines for miles. The benefit of emptiness is worry-free passing. In reverse order—race official observation car, Principia chase, RA XI, Principia lead, App chase, Runnin’ on Shine, App lead.

Miles ahead we spotted Appalachian State’s (“AppS”) version of the Pres Prius, a new model Ford passenger van sans president and drone. Their team’s photographers were standing on an unused railroad crossing. They had placed themselves to catch Runnin’ on Shine as it traversed the railroad crossing. We all watched as a local pickup truck went through that crossing (not much below 60 mph). It “caught air.” The vehicle’s forward momentum meant that all the pieces continued together for the foreseeable future.

If Runnin’ on Shine and RA XI weren’t careful, many pieces would “catch air.”  We all stood respectfully back as we photographed our respective teams. The drone footage was better than earlier. Given flight limitations (generally 400 feet), the Principia drone maxed at 100 meters. We didn’t have to guess, as the iPhone connected to the controls provides altitude readouts along with lots of navigation information, including maps of prohibited flying zones. One hundred meters is about 325 feet for those who calculate, or engineers who just know this stuff.

We were disappointed that we weren’t low enough to film the underside of either solar car. The footage from above, though, was great. If you freeze frame and zoom in, you’ll see everyone hunching tight, in expectation as Principia’s veteran lead van driver, the unflappable Steve Shedd, took the tracks. He took some air but didn’t seem to notice. You can’t tell from 325 feet above. With a right soundtrack, the video fit IMAX.

So, back into the Prez Prius to dash ahead. We passed Principia’s convoy, but Runnin’ on Shine was nowhere to be seen. It was faster than a revenue agent seizing an illegal still . . . that kind of shine.

We pulled into Cimarron for a quick stop. I was sitting on the curb when lead-solar car-chase whizzed by. I think Principia was filling the battery with “shine.” It took us more than 30 miles of country roads to catch up to RA XI. Perhaps it was because we dallied through Philmont, the famed Boy Scout ranch spread over 140,000 acres of wilderness. My older brothers attended Philmont in the late 1950s and returned home with imagination-filling stories of living the adventures of Kit Carson, Jim Bridger, or John Fremont. Now, I can write older brother Dennis and say that I, too, have been to Philmont. Or, through it.

Most of our drive was along the edge of the Sangre de Cristo Mountains. Just the name evokes mystery and wonder, and it slowed our speed—not the name, but the mountains.

We also learned the source of the bangs, booms, or poofs—Whittington Center, the National Rifle Association’s version of a summer camp. We figured the deer felt safer with traffic in downtown Cimarron.

We caught up with RA XI as the convoy crossed into the plains. The next adventure would be a 15-mile detour to the monument at Fort Union, a U.S. cavalry outpost. We passed the convoy and dashed ahead (via the Interstate at speed limits of 75 mph). We found a rise on the blacktop to Fort Union with vistas in both directions. You can see forever—the Sangre de Cristos to the northwest; rolling hills to north and south; flatter plains to the east. Principia senior Mark Trinidad, the drone operator, practiced his techniques, including operating from a moving vehicle. He drove the drone; I drove the Prius.

We waved to friends in other convoys—AppS and Illini. When someone arrives at a checking station, particularly after an arduous stretch, the other teams rush over to share their adventures. There are always waves and smiles.

Below us, perhaps ten miles distant, was an isolated grove to trees where Fort Union stood. Now only a small fraction of its original 44,000 acres, the fort’s “location seemed ideal for conveying a clear presence of the power of the United States government.” As we read the explanatory board at the pull-off, we heard the rumble of a jet aircraft above, and not that far above. It wasn’t the sound of a plane flying at 35,000 heading to Dallas. It was a B-52.

How do I know? Two years living on a B-52 base as a kid! During the Cold War, the massive planes operated 24/7. It was never a quiet moment as they lifted off or returned from strategic patrols. The plane is big, with long wings, and four sets of engines. More importantly, it barely has a fuselage. The B-52 has a very narrow middle, like a corset had been left on too long. It doesn’t need much space for its load of bombs. Instead, it needs power to lift and transport the weapons around the world. The plane made a slow curve, coming from the Sangre de Cristo and banked gracefully to the northeast. Like the drone, you hear the bomber after you loose sight of it. It is “ideal for conveying a clear presence of the power of the United States government.”

Our jumble of thought was focused by the appearance of the RA XI and escorts in the distance. The drone was launched and positioned. Mark was honing his craft, with leading shots, following shots, pulling back, and moving in. We repeated the exercise as the team returned to pass us, heading back to the freeway.

We had lots of rich thought time: reflections on nature, beauty, history, power and persuasion, treatment of native peoples, new friendships. Perhaps the theme for this day was not the solar car directly but the unexpected opportunities that result from this opportunity. The night before, Missy had wandered around the compound of our lodgings. It was an old 1950s motor lodge, ala Howard Johnson’s. The rooms were simple and very large. The evening air was cool and clear, and guests were sitting on benches in front of their rooms.

Missy loves animals (don’t tell our cats, but her love extends to dogs). Several doors down the portico was a miniature English Bulldog. Missy wandered over to talk to the owners. She was bored with my conversation partner, a retired Navy captain of 35 years, who is our assigned official race observer. He takes his duties seriously and keeps his conversations with the team on a formal level. But, with me—we were swapping “war stories.” Jim is an aerospace engineer and a world traveler. He is one of those happy conversationalists with whom it is a pleasure to stand next to and watch the sunrise.

That’s what we did this morning. We stood in the morning chill and talked about taking the time to observe the unnoticed world around us. At 6 a.m., a pickup truck slowly rolled next to us . . . it was the Principia truck heading back up the Raton Pass to retrieve the trailer and solar car packed inside.

Shortly afterwards, Missy and I had breakfast. She introduced me to the couple who owned the English Bulldog. In their short conversation that night before, the wives had discovered that each was quarter-Cherokee. That is sufficient to be registered with the tribal council. The women exchanged business cards and promised to help each other continue to explore their roots and heritage.

As we left the staging stop in Las Vegas, we spotted two Principians sitting on the ground among several MIT students. Their attention was focused on the right front wheel of the MIT car. It is more than a car or a race.

One Reply to “Thoughts and Observations: Day Four (8/6)”